This is the end, and the beginning.

Hi,
This will be the last post on this blog platform for Chris Cameron Photography.
I have moved the Blog to my own server and morphed it into the front page of my web site.

So please bookmark chriscameron.co.nz to be kept up to date on what I've been shooting or making or thinking.

Thanks,
Chris
No comments:

I have been meaning to diversify my skill set a little to be able to offer a more rounded package to my commercial yacht clients. Here is an example of a yacht interior technique I have been working on.

This first shot is an example of what you might typically find in the for sale section of many yachting magazines or on the websites of yacht brokers. 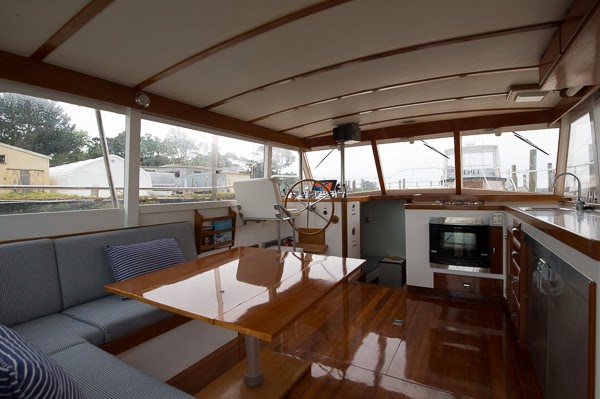 The teqhnique I have been using involves shooting multiple exposures with flash which are then combined in photoshop to produce a composit. Replace the view through the windows and Voila. 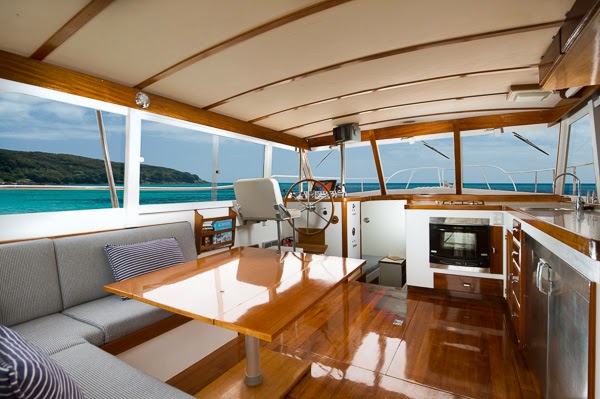 Here is the galley shot, before.. 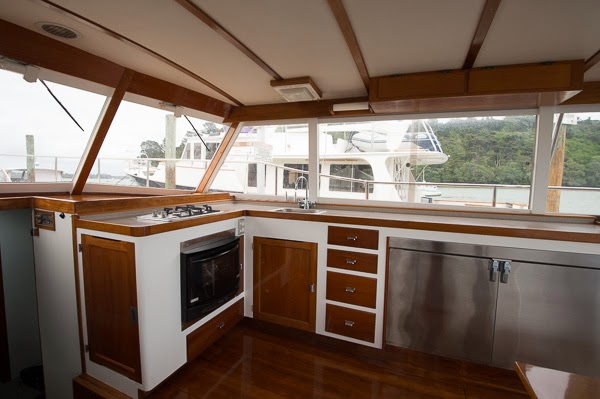 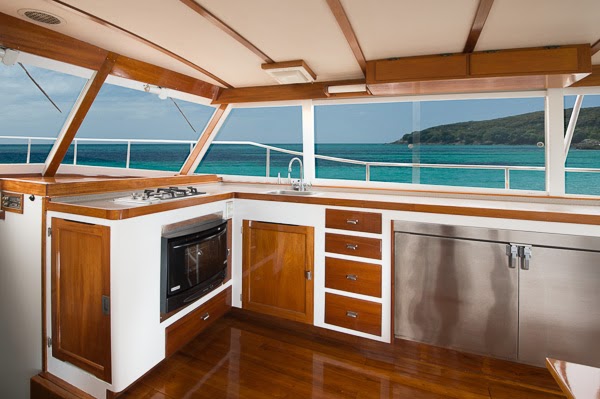 Came across this post yesterday on Peta Pixel.
I bought the app Joystick Mapper mentioned by one of the commenters (NZ$6) and now have a Playstation controller set up to work on my MacBook Pro. 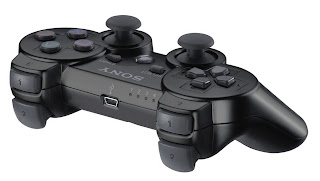 Specifically to work quickly through edits in Lightroom.
You can pair the PS controller and the Mac using this procedure.
The right joystick now operates the mouse movements, the left joystick operates the mouse scroll wheel (left, right, up and down). The right shoulder buttons are the left and right mouse buttons. Digital Left and Right buttons emulate the Left and Right keyboard buttons.
Digital up and down buttons increase and decrease the flag status. Triangle button is the 3 key for assigning three stars to selects, and the Circle key decreases the star rating. The R3 button is the return Key...
... But of course you could set up any combination you want.
Here is a screen shot of my settings in Joystick Mapper. 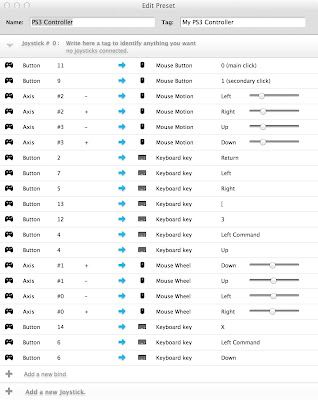 Now I can very quickly run through a days shoot, culling and selecting without having to take my eyes off the screen.
The Playstation controller has been ergonomically designed to be comfortable through extended hours of use and I happened to have one lying around. Actually not lying around so much as getting a pretty heavy workout most evenings.

One word of warning.
Be sure to shut down or deactivate the preset in Joystick Manager before disconnecting the bluetooth PS controller. Other wise weird stuff happens. My cursor tried to hide in the top left of the screen and couldn't be coaxed out of the corner with a magic mouse or Wacom tablet or trackpad or even a pretty please with sugar on top.

So I had, what I thought, was a great idea for a series of portraits of the Emirates Team New Zealand sailors. Using composites of the sailors and water splashes I put together a few shots.
Unfortunately it has been deemed a little too adventurous. 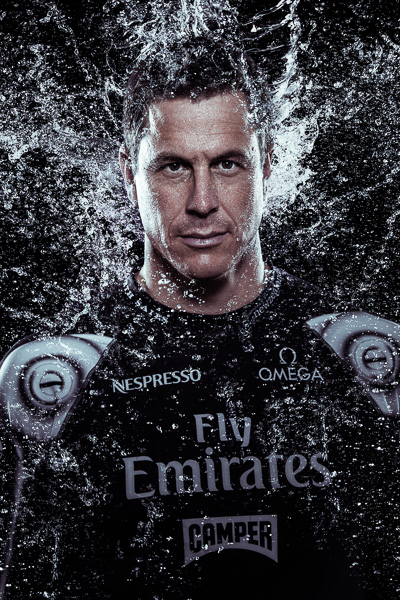 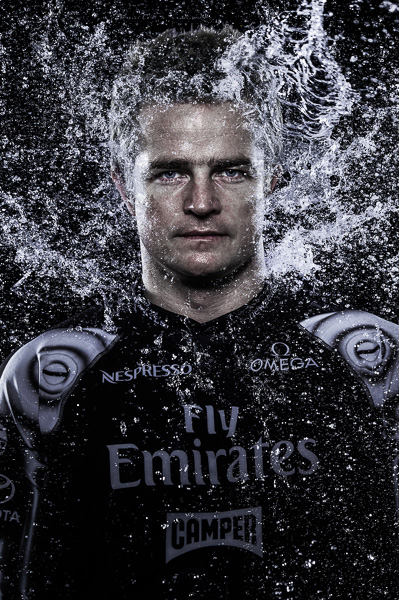 Still, saved me hours of work putting together the dozen or so other shots I would have needed to complete the set.
1 comment:

Keeping dry on the AC72

I don't mind getting wet for a good picture, but I hate getting salt water on my expensive camera gear.
Pro series Nikon digital cameras and lenses do have amazing weather resistant seals but I doubt they were designed to sit in what amounts to a horizontal salt water waterfall which is what you can get on board a fast moving yacht.

I have been trying out a camera waterproofing product called Outex.
The Outex system is based around a latex camera condom with glass ports for the lens and viewfinder.
Once enclosed the camera can be pretty much used as normal, under water to a depth of 10 Metres.
You have to remember where your buttons are and you can't review the images on the LCD screen of couse but it does allow you to hold and operate the camera as you are used to.

It is a finicky thing to fit to a large camera like the D3s.  The whole Camera/lens arrangement must be forced through the lens hole in the latex bag.

Not perhaps as easy to fit as a solid waterproof housing but a damn site cheaper, lighter and more tactile, and frankly I don't need the ability to take my camera under water, I just want to not have to worry about it when it gets a dousing.

Here I am onboard the Emirates Team New Zealand AC72. D3s in the blue Outex cover. 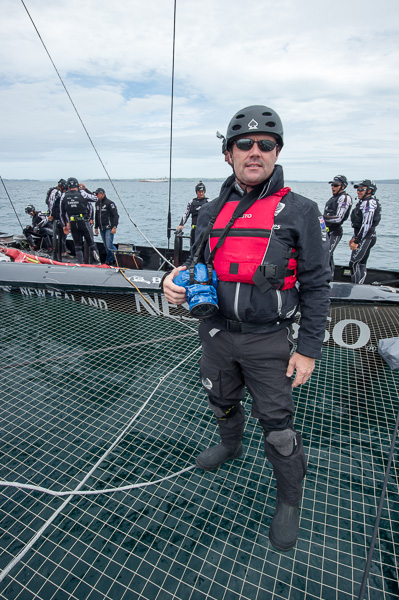 ... and here are some shots from on board. 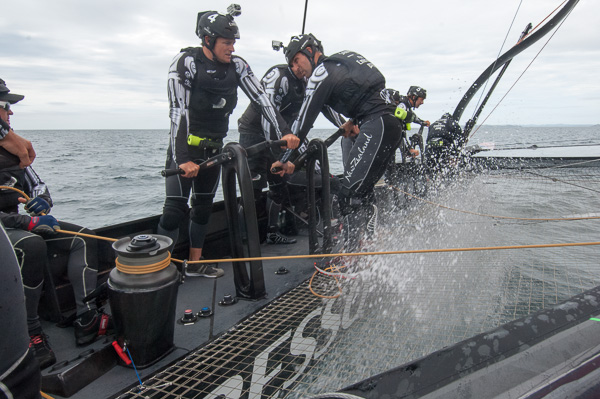 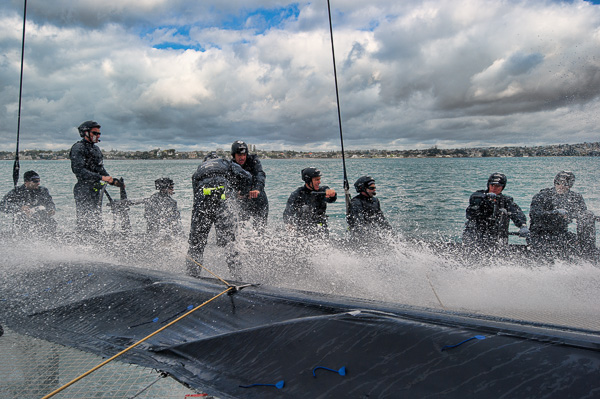 ... plus a few from on board CAMPER in the race from Auckland to Fiji. 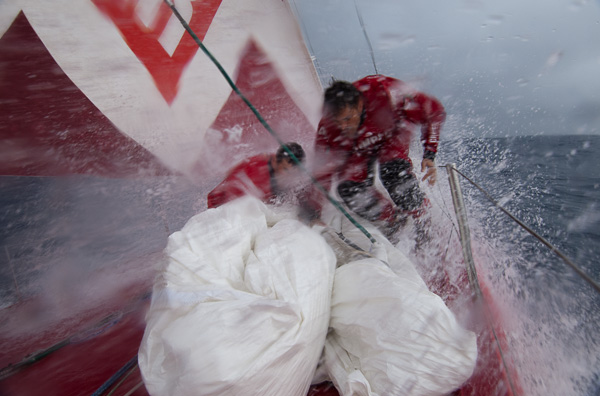 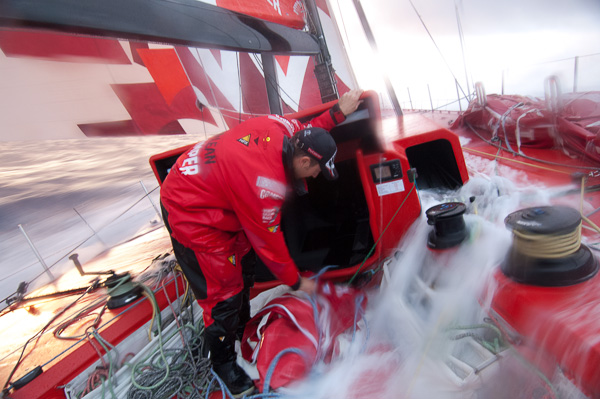 Learning to shoot a new boat

While the Emirates Team New Zealand sailors have been learning the ropes for sailing the AC72 class catamaran, I have been learning the techniques and angles for shooting the boat.
Keeping up is a big part of the challenge. With the yacht doing close to 40 knots at times shooting from the chase boat racing alongside takes quite an effort to keep the boat in frame and to hold on.
I'm still trying to find all the good angles but at the moment it is sometimes more prudent to stay out of the way. 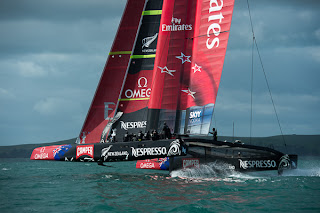 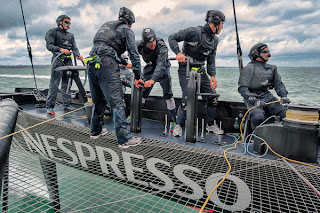 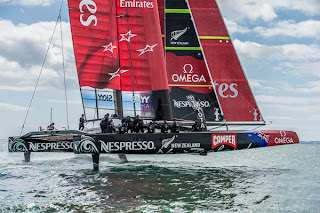 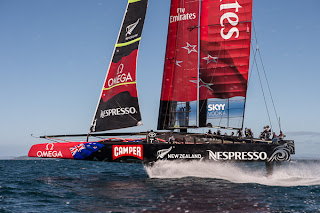 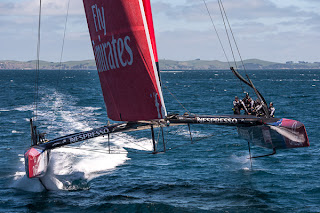 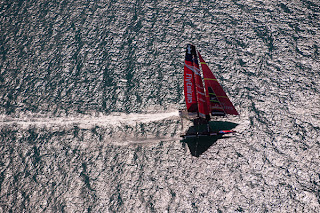 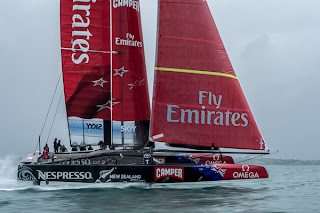 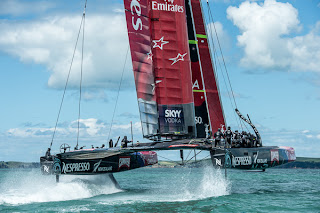 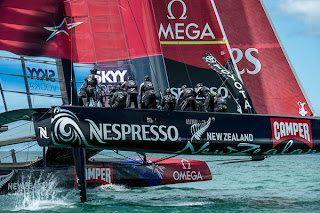 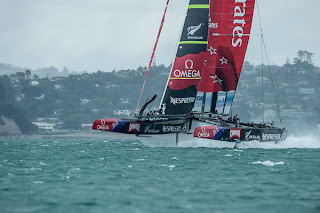 I have been traveling with a spring metal framed Easy Soft box EB-60 60x60 and/or Easy Soft box EB-60 40x40 which are great little softboxes for using with Speed Lights but are not that light and are a bit of a pain in the luggage because of their shape and size when packed down.
I found a cheaper umbrella type softbox made by Phottix which is slightly larger at 70 x 70 cm, lighter and packs down to a smaller, long thin package.
Only problem (and there always seems to be a trade off when you go cheap) was that the flash mount placed the head of the Speed Light very close to the top of the inside of the box. Actually touching the box when mounted on a Pocket Wizard FlexTT5.
So I designed and built this flash mount yesterday.
I designed the holder in ViaCad 2D3D and printed it in my Makerbot Thingomatic 3d Printer,
As you can see in the photos it brings the head much closer to the axis of the umbrella. The Nikon SB900 head simply presses into the holder and stays put using friction.
If you want to print your own I have put the stl file on Thingiverse. 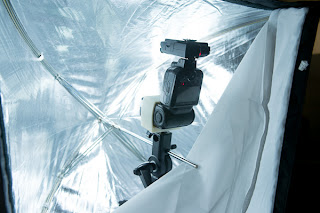 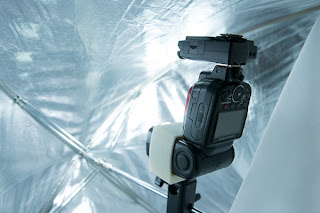 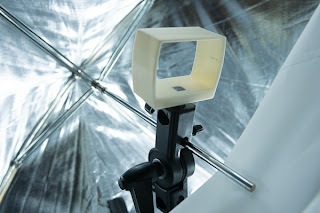